Early Smartphone - Under the Hood


Almost all mobile phones that we see today are 'smart'. :) Well, if a phone can play music, movies and games, can store unlimited contacts, let us browse the internet, write notes and documents, and let us install apps to do whatever else we want to do, ought to be smart. Don't you agree?

Mobile phones in early days were not all that 'smart', or shall we say multi-functional, though they were no doubt good at whatever they were intended to do. One of the earliest smart phones just combined a phone and a PDA (personal digital assistant) into the same device. One of the earliest PDAs were running the Palm OS (like some of us run Windows on our PCs today). The Palm OS could recognize gestures written using a stylus, it was touch enabled, had a web browser to browse the internet, and allowed applications and games to be installed by users.

Since when I was a child, I always took apart things to see what was inside. I had one such palm based smart phone long time ago, which went bad and could not be repaired. In this article, I'll take it apart to show you what it looked like under the hood - just for curiosity's sake. 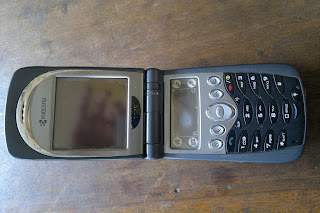 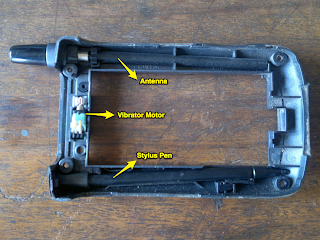 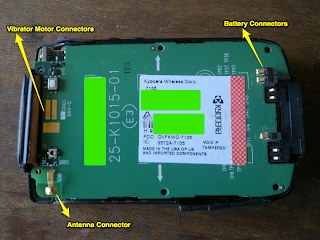 4. The top circuit board removed. This is the front side where we can see the components attached to the board. The large square chip with 'Qualcomm' written on it signifies that this is the board for the mobile phone circuit (Qualcomm makes mobile phone chips). The long white strip has a series of connectors that are used to make contact with the next circuit board. 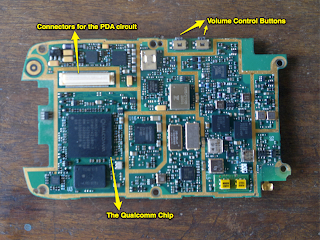 5. The two circuit boards are separated with an aluminum layer that also probably acts as a shield for electrical fields. Since the mobile phone circuit deals with pretty strong electro-magnetic fields, it was probably necessary to isolate the other circuits from it. Do you notice the thick copper lines in the circuit above? The ridges on the aluminium separator match the copper lines exactly. That's the ground connector. 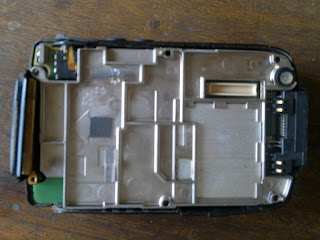 6. This is the 2nd circuit board for the Palm based PDA. Here the large square chip with 'Dragonball' written on it is the CPU of the PDA. The metallic clip like device held memory card (SD card). The battery charging and external connector terminals are connected to this circuit. It also is connected to another small LCD display that displays short information strings like the caller Id, battery charging indicator and such stuff which can be seen without opening the flap. 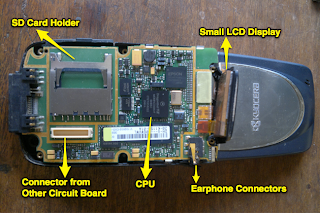 7. This is the keypad. Each key is a small switch with the concentric circles forming the terminals. The keypad has a conducting plate at the bottom of each key that connect the terminals when pressed. 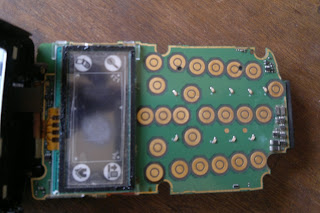 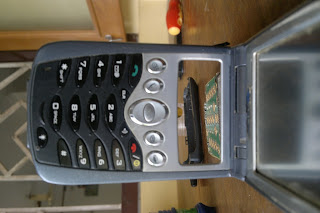 After taking the pictures, I carefully put the circuit back as it was. Weren't the components on the circuit board tiny? Newer phones have even more compact circuits. Today more and more of the circuits are being crammed into tiny integrated circuits (ICs - the black squarish components that you saw). They make electronic items smaller, cheaper to manufacture, and consume less power than larger components.

Sadly though, as components become cheaper and better with time, people find it easier to just throw old equipments and buy new ones in their place. So like plastics, we are slowly filling our junkyards with lots of electronic waste. The right thing to do would be to use gadgets for as long as possible, and when we replace a working gadget, we should pass the old one to someone who can make use of it. If it is not working, we should give it to someone who can recycle it appropriately.

In my case, though the phone didn't work, the palm PDA was working. I will be cleaning and restoring it before giving it off to be used by some kid who cannot afford a PDA. In future articles, I will be opening and showing you what lies under the hood of a few other items that I had.
Posted by Tanmay at 11:06 PM

Email ThisBlogThis!Share to TwitterShare to FacebookShare to Pinterest
Labels: under the hood
Location: Bangalore, Karnataka, India